Are you wondering what the best Keto salt choice is? Check out this guide to learn why pink Himalayan sea salt is the right salt for you.

Unless you’ve been living under a rock for the last couple of years, chances are you know somebody who’s eating a ketogenic diet. Maybe you’ve even considered trying it yourself.

Read on to learn more about the importance of salt on a keto diet and gain some insight into the best keto salt to use.

What is the Keto Diet?

Just in case you’re not super familiar with a ketogenic diet, let’s go over a few basics to get you up to speed.

A ketogenic diet is essentially a diet that is very low in carbs and very high in fat. When you reduce your carbohydrate intake and replace your carbs with fat, your body transitions to a metabolic state that is known as ketosis.

When the body is in a state of ketosis, it burns fat for fuel instead of glucose (which the body gets when it breaks down carbohydrates).

In a state of ketosis, the liver also turns fat into compounds called ketones, which supply energy to the brain.

Benefits of the Keto Diet

There are lots of potential benefits that come from eating a ketogenic diet, including the following:

Many people also follow a ketogenic diet to help them lose weight.

While you can lose weight on any diet, as long as you’re eating fewer calories than you’re burning, a ketogenic diet can be helpful because people who follow it tend to feel more satiated and less likely to overeat and give in to their cravings.

The Importance of Salt on a Keto Diet

So, what does salt have to do with a keto diet? In short, it has to do with electrolytes, specifically sodium.

A ketogenic diet is a great tool for regulating blood sugar and preventing insulin spikes. While there are lots of reasons to limit insulin release, a lack of insulin can trigger some unpleasant side effects.

Insulin helps the body retain its sodium by aiding with sodium reabsorption. When the body isn’t producing much insulin, sodium passes through the bloodstream and is excreted through the urine.

When you’re eating a ketogenic diet and not consuming adequate salt, there’s a good chance your sodium levels will be lower than ideal.

What Happens When You Have Low Sodium?

Low sodium levels can cause a variety of symptoms, including:

Many people experience these symptoms when they first transition to a ketogenic diet. They’re sometimes referred to as the “keto flu.”

By making sure you’re consuming enough sodium, you can lessen (or sometimes avoid altogether) these symptoms and have a better experience while eating keto.

Adding more salt to your diet is an easy way to make sure you’re getting adequate amounts of sodium. But, it’s important to note that not all salt is created equal.

If you want to see the greatest benefits from adding more salt to your diet, you ought to start cooking with pink Himalayan sea salt.

What is Pink Himalayan Sea Salt?

What actually is pink Himalayan sea salt, and what makes it better than regular table salt?

Pink Himalayan salt comes Pakistani salt mines, which are located approximately 300 kilometers from the Himalayas. The pink color of the salt comes from iron oxide deposits and rust in the mountains.

Pink Himalayan salt is unprocessed, unlike traditional table salt, which has nearly all of its nutritional value stripped from it.

Pink Himalayan salt is a great source of sodium. But, it also contains trace amounts of several other essential minerals and nutrients, including:

Many people notice that they feel much better on a keto diet when they are consuming pink Himalayan salt than they do when they just consume regular table salt.

How Much Salt Do You Need?

If you’re seeking optimum nutrition, you ought to make sure you’re adding pink Himalayan sea salt to your food. But, how much salt do you actually need?

The specific amount of salt people need to feel their best varies person-to-person. If you are an active person who sweats a lot, for example, you’ll need more sodium than someone who is sedentary.

At the very least, it’s important to make sure you’re meeting the recommended daily amount, which is 2300 milligrams.

Many people who follow a ketogenic diet consume quite a bit more sodium than this, though. Some people eat and drink up to 4000 milligrams of sodium per day.

How to Make Sure You’re Getting Enough Salt?

If you’re eating a ketogenic diet comprised primarily of whole foods (which is the best approach if you want to experience all the benefits a keto diet has to offer), salt and sodium can be hard to come by.

But, there are lots of things you can do to ensure you’re meeting your daily sodium requirements:

Another easy way to increase your sodium consumption is to add a teaspoon or so of pink Himalayan sea salt to your water. Add some fresh lemon juice to the water, too, for additional electrolytes.

Get Your Salt Today

As you can see, there are lots of benefits that come from eating a ketogenic diet. But, you need to make sure you’re consuming a high-quality salt while eating this way.

If you’re in the market for a delicious, all-natural, high-quality keto salt, we’ve got you covered at Himalayan’s Finest.

As recently seen on: 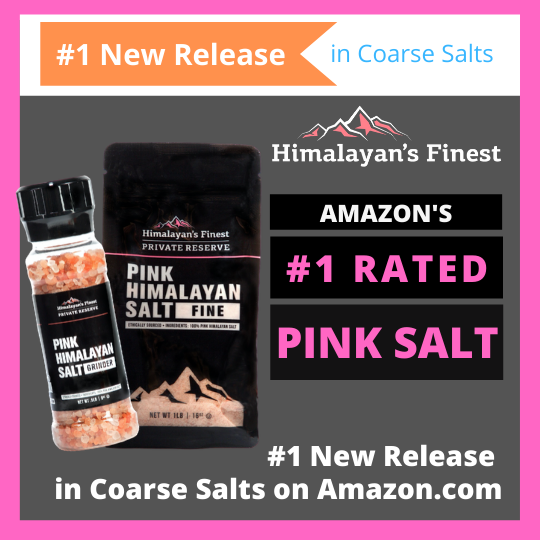 YOUR FIRST ORDER ON OUR STORE

You have Successfully Subscribed!